“I PRAY HE WILL REIGN OVER YOU FOREVER Ad EVER AMEN”

“Know that the Lord is near to all the broken hearted and he gives Victory over Death Situations.”

Romans 6:9 Knowing that Christ being raised from the dead dieth no more; death hath no more dominion over him.

When we read today’s scripture in isolation we think it talks of actual death. But we look at the preceding and following scriptures we find it speaks of another death.

In yesterday’s mail I wrote a little about spiritual life, so even though in the natural God limited life to 120years yet our spiritual life still continues to be a few thousands of years.

People do not fear God because they lack understanding of spiritual life, many think they would go to Hell and be killed by some monsters after being tortured for a short period. They are fooled about Hell being ruled by Satan (Dragon and the Beast) and their goons, it is like saying criminals rule a state prison.

Hell is prison like Peter plainly puts. This prison is controlled by the Angels of God and not Satan (he is bound here until the end). In Hell there is no pounds of fire or drums of burning oil like depicted by paintings in the Catholic Church. Hell is a prison where every cell is like a solitude cell. The fire is not external but internal and is the burning of sins that each one carries. That means in Hell each one can be aware of the suffering of the others but cannot see or communicate with them.

Spiritual death is unlike natural death where life switches off. Spiritual death does not change the time period of the person for it still remains the same, what death does is cause decay of life by suffering.

If we realize the problem is not sin but the consequence of sin. What sin does to us in the spirit is horrifying. People think just by getting forgiven all matter is settled. They do not realize even after Christ died on the crucifix yet He was still performing a sacrifice and went wandering in the wilderness and did not allow Mary the Magdalene top touch Him until He ascended to the Father and returned back. His main goal was not just forgiveness of sins but more to make peace between man and God so that we receive the Spirit of God who restores the damages sin does.

Today’s message talks of carnal death which is the removal of the erosion / corruption caused by sin. This corruption causes us to serve sin like a drug addict is drawn to drugs. It is only by the power of the Spirit of God that we can overcome death and this happens not after our natural death but while we are alive, today’s message it is written not only for Christ but also for us when those who overcome sin resurrect, death will have no power over them.

Lord You are Almighty God. You Lord are life and abundant life. You Lord desire that we too receive this abundant life when we are united / married with You in Heaven. Lord we pray we understand the dangers and consequences of sin so that we walk in it no more. We also pray your people truly no only break the bondage of sin but also undo the damage sin has done to us by the power and working of the Holy Spirit…

Acts 13:37 But he, whom God raised again, saw no corruption.

Romans 8:21 Because the creature itself also shall be delivered from the bondage of corruption into the glorious liberty of the children of God.

1 Corinthians 15:52 In a moment, in the twinkling of an eye, at the last trump: for the trumpet shall sound, and the dead shall be raised incorruptible, and we shall be changed.

18 For Christ also hath once suffered for sins, the just for the unjust, that he might bring us to God, being put to death in the flesh, but quickened by the Spirit:

19 By which also he went and preached unto the spirits in prison;

20 Which sometime were disobedient, when once the longsuffering of God waited in the days of Noah, while the ark was a preparing, wherein few, that is, eight souls were saved by water.

John 20:17 Jesus saith unto her, Touch me not; for I am not yet ascended to my Father: but go to my brethren, and say unto them, I ascend unto my Father, and your Father; and [to] my God, and your God.

Matthew 28:7 And go quickly, and tell his disciples that he is risen from the dead; and, behold, he goeth before you into Galilee; there shall ye see him: lo, I have told you.

13 And, behold, two of them went that same day to a village called Emmaus, which was from Jerusalem [about] threescore furlongs.

14 And they talked together of all these things which had happened.

15 And it came to pass, that, while they communed [together] and reasoned, Jesus himself drew near, and went with them.

33 And they rose up the same hour, and returned to Jerusalem, and found the eleven gathered together, and them that were with them,

49 And, behold, I send the promise of my Father upon you: but tarry ye in the city of Jerusalem, until ye be endued with power from on high.

26 And after eight days again his disciples were within, and Thomas with them: [then] came Jesus, the doors being shut, and stood in the midst, and said, Peace [be] unto you.

27 Then saith he to Thomas, Reach hither thy finger, and behold my hands; and reach hither thy hand, and thrust [it] into my side: and be not faithless, but believing.

God bless you abundantly! We love you! 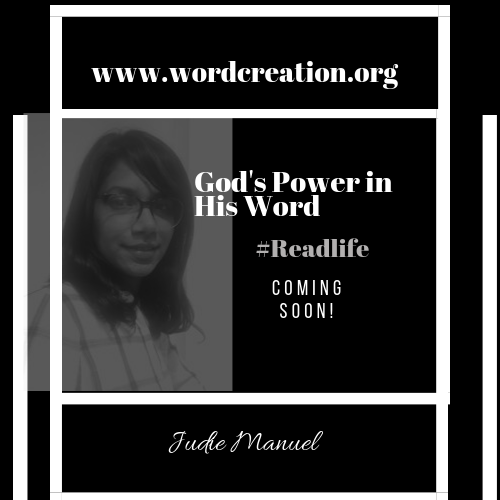 Professionally she is a Content Executive and a Creative Consultant for Digital Marketing inclusive of websites and web pages. Spiritually she loves to pray for everyone carrying any burden, she loves worshiping and bringing down the presence of God. If personally, you want to have a word with her, you can mail her on judiemanuel@gmail.com. Ping me on Facebook, Instagram and Twitter! It's great to have a wonderful conversation! “And I will make you a great nation, And I will bless you, And make your name great; And so you shall be a blessing; And I will bless those who bless you, And the one who curses you I will curse. And in you all the families of the earth will be blessed.” – Genesis 12:2 View all posts by Word Creation, Judie Manuel

Beautiful creation of God, Remember his great Love for us. He bestowed the few of Hermon and compassionately saved his generation for Better tomorrow. He removed the bondage of Sin, a filthy lies, a strong iron bars many things not set right in his imagination. He LOVED us more than anyone could ever think. We are the sheep of his pastures. WONDERFUL SAYING OF THE ALMIGHTY GOD. The Bible says, As high as heavens are on the earth so is His ways.... Isaiah 55:9 Get connected to know more on the ONE LOVE DOES EXIST is the LOVE OF GOD... MAN WILL FAIL YOU, BUT GOD WILL UPRAISE YOU!!!❣ -Judie Manuel, Gospel Writer and Speaker #bold2020 #victory #readlife #news #jesuslovesyou #jehovah #king #glory honour #praise #mumbai maharashtra #india #nepal #pune #zimbabwe #bangladesh #chennai #Hyderabad #jesusisalive #hungerygeneration #powerfulspeaker #america #Australia #brazil #china
This is the most cutest picture I have ever found in the any books or magazines, Online or Offline .... You know what????? Well Jesus is walking with you ... How wonderful it is for your eyes to see the most amazing beauty of Heaven is walking with you always. .. ❤ I am really excited... I am really blessed to share this photo.... Now you can call me or message if you want to know more about his love and compassion. ❤ We Praise the Living God...We are in His beauty... He is our Lord.. God of Abraham, Isaac and Jacob.... -Judie Manuel, Good News Writer and Speaker #graceisfound compassion #love #Jesus #india #world2020 #manifestofGod'sglory #punjab, #Glory honour #thanks #LordisGood #Mumbai #Israel #zimbabwe #brazil #china #japan Europe #greatness #grace #joy #peace #victory #readlife
The Star shines brightly for Your VICTORY. God said it and happens to the fullest. God created you in his image of VICTORY and Beauty. He said and it was so!!! It's awesome HOW GOD DOES GREAT THINGS WITH MAKING YOUR LIFE A WASTE. Naming the VICTORY is just amazing!!! I thank God for Destroying the powers of Hell! The secret weapons the devil often uses to destroy your destination. Satan is a liar and HE IS DEFEATED WITH BY THE WORD OF TRUTH which is the Word of God. ❤ His Revelation is Revelated which passes from generation to generation. - Judie Manuel, Good News Writer and Speaker ❤ #goodnews #people #victory #jesuslovesyou #2020world #godisgood #allmine #mumbai #pune Hyderabad #Chennai #makenoise #thailand #russia #newzealand #brazil #canada #epic
One of the greatest blessings you find in the Bible was talking to God and following his voice and asking what He wants with many situations going on with you and your lifestyle He has never left his people alone. In this New Year I wish and encourage you to talk to Heavenly Father, the King of Kings and Lord of Lords. The greatest blessing is written in the Life. YOU ARE A VICTORY AND NOT A VICTIM. Jesus loves you!!! Happiest New Year!!2020 #newyear resolution #glory #honour #power #praise #thanks #2020 #america #newszealand #calling #greatfuture #noworry #hepaiditall #greatesttest #greattestimony #America #singapore #goodnews #india #china #japan Brazil
One of the best things I have learned from the Word Creation of God is being sustained in Jesus Christ of Nazareth! The more you rely on God, the more you find solutions to your problem. God never quits nor he forsakes his generation. Today if you are reading this message know that the Lord is working for you even when you don't understand his plans for your life. He is able and just. He never leaves his loved sheep. He finds it anyhow in the desert or any wilderness to show you the other side of the river, flowing with pure crystal clear water!!! So that you may never go thirsty again! The Lord is good! Blessed be his name forever! From now it's only 2 days to enter 2020, HALLELUJAH!!!! And what I see is VICTORY! You see it according to his word, His being!!! His SALVATION and His Deliverance!!!! - Judie Manuel, Good News Writer and Speaker #2020world #victory #jesuslovesyou #argentina #adorehim #lord #reign #highlights @#glory #honor #praisetheLord #jehovah #indian #asian #news #gospel #russia #chinatown #zimbabwe #japanesebeauty #reign #glorytogod #americans #singapore #brazil #germany #readlife #hungrygeneration
The Love of God and the Good News! Jesus is the Gift for you today! What are you giving him???? Well, do you know all about Christmas???? Here are some important points to note! We celebrate more powerfully because the King is born, the love has come down!!! As the year is ending, no matter who and what on earth is reigning or ruling, we know the King of Glory is the Lord Almighty! He is Jehovah!!! Follow WC and get more updates! We are reaching out to the unsaved!!! - Judie Manuel, Good News Writer and Speaker #mumbai #delhi #punjab #amritsar #goa #lumba #pune #nagar #jesusislord #praisethelord #kingofglory #jehovah # makingnew #america #belgium #china #japan #singapore